New Rinks to be build in Argentina and Israel

One of the most important aspects to play Roller Hockey is the Rink.
There are several kinds of Rinks, one best than others. When somebody consider a Rink, must take care about the size, the lines, the kind of floor, if is indoor or outside...

Taking a look in the best Roller Hockey Championships you can confirm that is clarified that indoor rinks are the best, because you don't have problems with weather conditions, something that could be danger with the skates.
In other hand it is not proved which floor is the best. In Portugal, Spain and Italy there are wood and concrete floors.

The main reason to right this article it's not just about the type of rinks existing, but other really important aspect, the appearance of new Rinks.
All of us know that for example, in Football each year many Stadiums are built or rebuilt having better conditions. In Roller Hockey unhappily the things don't run so fast as football, but is possible to see some good news around the World. Was reported some days ago the construction of a new indoor rink in Israel
and the reconstruction of a new floor in an Argentinian rink.

About the Israel new rink it will be for Ramat Yishai Roller Hockey Club. After several years playing in a poor field-level asphalt rink,  and a lot of requests for assistance in the development of our sports, at the local and regional councils, they did it finally!!! At this moment the works are advancing and the new rink is being constructed. This will be one of the best in all Israel, and one of the few with roof.

In the case of Argentinian new floor it will be constructed for Club Atlético Alumni with an important support of National Government, represent by Sports Minister Adán Bahl. The total investment by the government will be around 40.000 pesos ($9.221), and will allow the substitution of the entire floor.

Like in most countries this kind of Works is just possible with the support of public entities like National Governments or Regional Councils.
Hope that these two examples could have continuation and bring more examples in other parts of our planet!!

Interesting documentation and websites about rinks:

Official Markings of the Rink in Roller Hockey approved by CIRH

An amazing news for Indian Roller Hockey!!!
After some years without come back to India Aldo Baraldi was invited again by RSFI to be the national coach of our country.
As we know India have this year two important competitions to dispute, FIRS B World Cup (held in Montevideo), and the Roller Sports Asian Games (not decided the city yet).

The Italian newspaper Gazzettadimodena has reported that Mr. Baraldi is  traveling, at this moment, to Faridabad, where will be hosted the national championship. The plan is to select over 30 players to the first conduct training and to meet with the leaders of the Federation, and State Associations.
Thus Mr. Baraldi will be in India during a month with our players for an initial preparation.
After this first stage, the group will have other meetings that will require the continued presence of Mr. Baraldi in India to select the final fifteen players.

About is curriculum, Mr. Baraldi belongs to the legendary team of Amatori Modena, which has won two national championships. At the end of his brilliant career, was coach, of players like Davide Malagoli, Andrea Pontiroli, and his son Massimo Baraldi.
Once again his knowledge of hockey has convinced the leaders of India Federation to return. His work in India allowed an effective progress on the technical-tactical and excellent results in the international competitions. Aldo Baraldi, will be accompanied by his wife Joan.

This is the right way and it is an excellent news that RSFI had done this agreement with an International Coach which can bring new ideas to develop our Hockey. Like other countries as Israel this is an important partnership to prepare the 2012 Competitions. 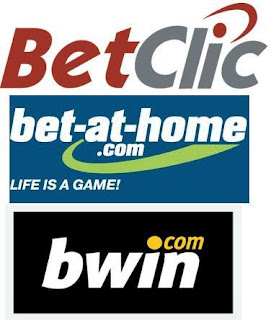 Some people condemns bet games, and the money/vices that each one moves. But we can' forget that nowadays, they are one of the main sponsors of sport clubs and federations, investing a lot of money on it. With Roller Hockey this investment still is not to much important, but year by year the quantity of Bet companies and the diversity of bet offers is increasing, concerning Roller Hockey. At this moment it's possible to bet in the follow websites, and respectivs championships:

At this moment Rolling Together noted, that FC Porto is the unique Roller Hockey team sponsored by a Bet Company, Bet Clic, with a little banner on the tshirt.
Also for the first time ever in Vigo 2009 (FIRS World Cup), Bwin used the TV broadcast of all matches, for LIVE Bet's. This was an excellent form to promote this sport with people which probably didn't have any idea about the existence of this sport.

For the ones against this kind of companies think twice, and look for the rest of sports, in all of them you can find Bet Companies associated. Thus Rolling Together believes that is time to see the main Championship with more Banners of this companies, however this depends of Federations and Clubs interest.

One of the big lacks in Roller Hockey is Marketing and few Sponsors!!! Tweet
at 10:51 AM 6 comments

OK Stars like NBA All Stars, one more good example from Spain

For the third time OK STARS takes place in Spain. In 28th January, Blanes will be the Spanish Capital of Roller Hockey, with a full day of practice.
For the unknowns about this competition, it's comparable to NBA All Stars. The Event is divided in different performances as:
During the morning, the young championship will promote roller hockey between the Spanish young players,t he best way to prepare the future of roller hockey.
After the lunch comes the Women's OK STARS, showing that Roller Hockey can't survive without women's. Concerning the selection of women players and coaches to be prsent in Blanes, will be chosen by capitans and coaches of the teams of each conference (more details on the rules of tournament).

The main part of OK Stars will come after with some of the best players in the World. They will dispute first some Skills Contest splitted in 3 different categories:
The winner of each category will win 500€!

To conclude the amazing day there will be the Match of Stars between the players of two conferences (again see all the rules of tournament).
One of the most interesting points of the Men's tournament is the selection of each player. Thus, all Roller Hockey Fans have the opportunity to choose their favorite players to play in Blanes.

The voting will be until 18th January 2012 on the website of Spanish Federation.

Some videos of last editions


Don't forget to vote and to watch the possible broadcast by Spanish and Catalan TV of this amazing event!!!
Source of news:RFEP
rules