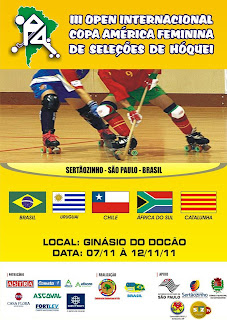 One more International competition is starting soon, and once again played by Women. After CERH Women's Euro Cup, conquered by Spain, now it's time to decide the American title. From 7th to 12th November, will be disputed in Sertãozinho, Brazil, the 3rd Copa America. After the biggest Copa America edition in 2010, played in Vic, Catalonia, where both sex's were present, again Women's tournament will be separated.             Five teams are expected to compete:
It could be difficult to understand somethings about this competition. First of all why Argentina, the actual Champion of this competition, it's not present?? Simple answer said by CAP (Argentinian Roller Sports Confederation), this year all money is concentrated in Men's national teams support. It's good to remember that Argentina was present in their own territory, for the Pan American Games.
Other two national teams which will not be presents, and usually are part of this competition are Colombia and USA. Unhappily both of them federation recognize the lack of funds to support the participation in this competition.
Finally other two doubts that all readers of this article can have. Why two non American national teams are presenting? As the title of the tournament indicates it's an Open tournament, so all countries invited by CSP (South American Roller Sports Confederation), can play the tournament.
The last question it would be, why a region that is not a country, like Catalonia is playing?? As mentioned in Rolling Together in several countries, Catalonia is the main region in Spain where Roller Hockey is played with a lot of teams. As some of you know, they keep a big strike to have the right to participate in sport international competitions with official national teams. CSP understood their opinion and made Catalonia part of their membership list.
Returning to details of the competition the matches will be:

With this tournament all national teams present, and also Brazilian Organization, are preparing the 2012 FIRS Women's World Cup, which take place next year also in Sertãozinho, Brazil.
For Brazil this is a great opportunity to put again, Women's rolling on the right way, after the 2006 crisis...
Report about the Tournament
Follow all the Copa at:
Official Facebook Page of the Tourament
Unofficial Facebook Group of the Tourament
http://www.hoqueibrasil.com.br/
http://www.mundook.net/
Copa America Website (By Cataln Federation)
Tweet
at 9:01 PM